How long has it been since we have been able to get together as a guild?  It seems like forever.

Almost a year ago while attending my guild meeting we decided to do a round robin, and I say "of sorts" because we would be the only ones working on our own quilt.  Little did we know that this was the perfect solution since we haven't been together since last March!

In my stash was this fabric yardage of slightly off white with tiny medium blue blocks.  I fell in love with this fabric and knew I would find a reason to use it someday.  The round robin seemed like the perfect solution.

This is a close up of the background fabric showing a little better than the rest of my pictures. 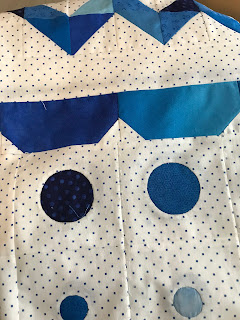 Our centers could be anything we wanted.    I had this free pattern in my stash of patterns  that I had been wanting  to do and this seemed like the perfect time to try it out. 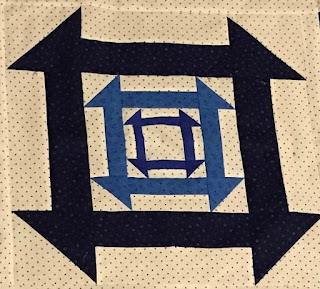 Works out great since I don't think I want to make a whole quilt out of this block.  There are a lot of pieces to it and it was pretty time consuming.
Our next round was to be 9-patches 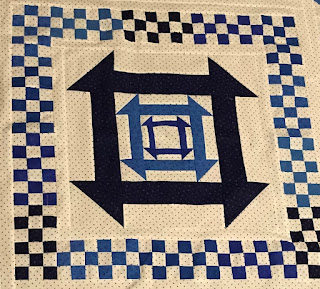 Then we were onto triangles.  So I decided to do half square triangles and laid them out in a chevron border. I had to add an extra background sashing to get to the  size that would allow me to get those boxy corners on this border.  It just so happened that I had a magazine lying on my sewing table that had this border dog eared 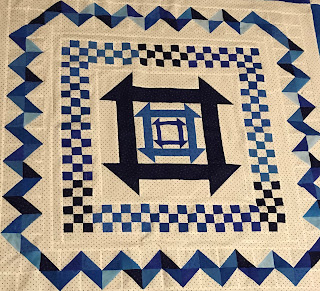 After that, we were told snowball blocks.  Well, I was thinking I didn't want this quilt to get too big (I tend to make most of my quilts BIG), so I made my snowballs and then cut them in half.  I figured I could get away with this since we were told for the 9-patches, we could do a disappearing 9-patch if we so desired.  .
Works for me! 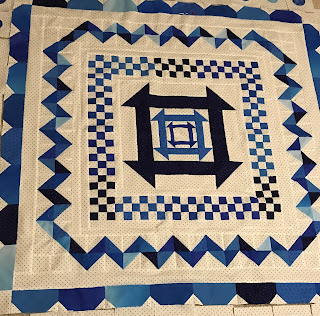 Next the the last border was curves.  Oh...what to do?  I didn't want to make Drunkards Path blocks and I thought of Gwen Marston's modern curvy insets in a plain border, but I was thinking it was too modern for this quilt, so I did some applique circle blocks.  As it was, my friends have been working on some circle blocks to make a full quilt out of them and I was getting sucked into that rabbit hole, but didn't know if I wanted to get involved in a long term project (I have too many of those), so I got my satisfaction of making just enough to make my next border. 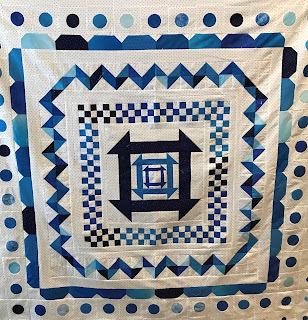 Then what do  you know!  The last border is applique.  At this time, I am way over the due date on finishing this quilt.  Doesn't matter though since we haven't met for almost a year now, but I was so ready to get this one finished and still wanted to like this quilt.  So, I decided to make some more circle blocks, only a different size (wasn't interested in doing vines the lots of applique flowers and leaves).  I am finding I really like doing reverse applique (which is what these two rows are.  So my final row is done and the top is complete. 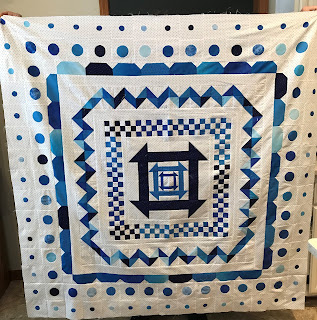 Now I am awaiting the fabric I have chosen for the backing on this quilt.   I bought it on sale from Hancock's of Paducah. Sure hope there isn't a problem as I haven't heard if it has been cut or mailed yet, but it is a variety of blues in a hand painted stripe.  I think it should go well.
This gives me time to think of how I would like to quilt it, too.  Do I just want to do a panto or will I do some custom work on this one?  Time will tell.  Also, depends on how busy I am  at the time.
For now, I am on to the next project (s).  There's a sweater that needs sleeves, a charity quilt that needs putting together and a commissioned quilt that needs quilting.  The list of things to do is always never ending.
at January 31, 2021

How do you choose colors for a quilt?

When it comes to choosing colors for a quilt, I am sure there are many ways each of us go about it. You may fall in love with a particular f... 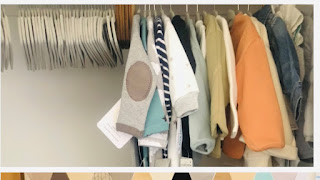 Mimi
I am known as Mimi by my four grandsons. They are 16, 14, 12 and 7 years old. They are what life is all about. I recently retired from my office job. Now I am just loving being a grandma who loves to quilt and is once again dabbling in knitting, I am a longarmer and an APQS retailer. I can see retirement being very busy!

Memory is a wonderful treasure chest for those who know how to pack it.

I own a Millenium; and I am a Retailer for APQS

I own an Accuquilt die cutter